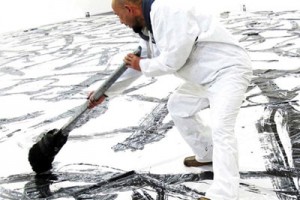 Qin Feng is a leader of contemporary ink painting and a forerunning representative of the Chinese avant-garde art movement.  Qin studied at Shandong University of Art and Design, and later moved to Berlin, Germany, and then the United States.  His paintings experiment with traditional Chinese ink painting and Western abstract expressionist styles, maintaining a link with the traditional while toying with the imported.  His use of tea, which represents the East, and coffee, the West, in the backgrounds of his ink paintings emphasizes cultural contrasts and his attempt to bring the two together.

Qin’s upbringing in Xinjiang, located in the extreme northwest of China, profoundly influences his work. Once an intersection for Silk Road trade routes, Xinjiang historically has been a center for multicultural and multiethnic coexistence.

Qin’s childhood in Xinjiang, and later his travels abroad, exposed him to varying cultures and languages, resulting in his present fascination with written and spoken word, systems of universal communication, and cultural difference.